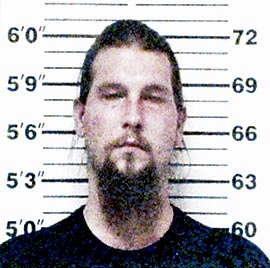 A county jail inmate, who faces rape of a child charge, has been charged with attempting to hire an individual to kill his wife. Larry E. Gentry, 27, Pleasant Shade, was jailed in September after being charged with rape of a child less than 13 years old and sexual incest.

Gentry, who has remained jailed since September, has now been charged with solicitation to commit a felony in connection with the murder for hire plot. According to an offense report filed by Det. Sgt. Steve Babcock, while being incarcerated, Gentry attempted to hire a fellow inmate to kill his wife.

Notes were discovered discussing the alleged murder plot with a fellow inmate. Det. Sgt. Babcock and Lt. Det. Kit Jenkins interviewed the inmate who turned over the notes to jail personnel.