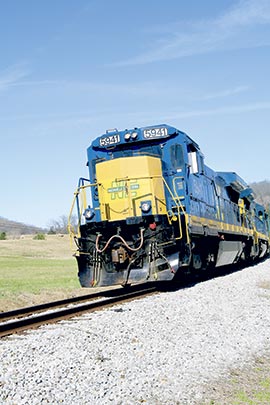 RAILROAD IN NEED OF FUNDING FOR REHAB

(Special to the Courier: By Sam Hatcher.)

Johnny Cash topped the country music charts some 50 years ago singing, “I hear that train a comin,” from his legendary ballad Folsom Prison Blues. While the train he heard sent him to the pinnacle of country music, the clickety-clack of trains rumbling down tracks heard in Smith County today is helping provide jobs and economic stability here, according to County Mayor Mike Nesbitt. Nesbitt described the Nashville and Eastern Railroad’s presence in Smith County as a “leading force in local government’s ongoing effort to create new job opportunities, attract new industry and strengthen the local economy.”

The Nashville and Eastern has been providing freight rail service to Smith and three other Middle Tennessee counties, including Davidson, Wilson and Putnam, since 1986, when the company was formed “to resurrect short-line freight rail operations over 110 miles of what was neglected and soon-to-be abandoned track,” according to Stephen Drunsic, NERR president. Several companies in Smith County currently have the opportunity to use the railroad to ship and receive goods, Nesbitt said addressing the availability of rail service. “Having railroad freight service available gives us a certain advantage when recruiting a new industry. “Just being able to say we have direct access to rail service makes an important statement about our county. It says we’re connected and we have an amenity that many counties don’t have,” Nesbitt said.

While local chambers of commerce, community leaders, government officials and others speak to the importance of having a railroad operating in the community, there is concern that certain financial challenges being faced by railroads may threaten or impede rail service in many rural areas. According to leaders in the railroad industry in Tennessee, short-line railroads all across the Volunteer state are dealing with an issue that is crippling their ability to have the financial resources to rehabilitate track and infrastructure on which their trains operate.