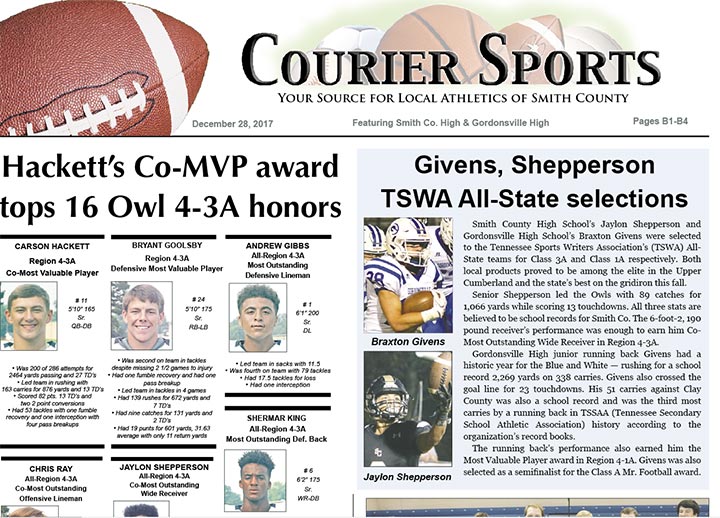 Smith County High School’s Jaylon Shepperson and Gordonsville High School’s Braxton Givens were selected to the Tennessee Sports Writers Association’s (TSWA) All-State teams for Class 3A and Class 1A respectively. Both local products proved to be among the elite in the Upper Cumberland and the state’s best on the gridiron this fall.

Senior Shepperson led the Owls with 89 catches for 1,066 yards while scoring 13 touchdowns. All three stats are believed to be school records for Smith Co. The 6-foot-2, 190 pound receiver’s performance was enough to earn him Co- Most Outstanding Wide Receiver in Region 4-3A.

Gordonsville High junior running back Givens had a historic year for the Blue and White ­­— rushing for a school record 2,269 yards on 338 carries. Givens also crossed the goal line for 23 touchdowns. His 51 carries against Clay County was also a school record and was the third most carries by a running back in TSSAA (Tennessee Secondary School Athletic Association) history according to the organization’s record books. The running back’s performance also earned him the Most Valuable Player award in Region 4-1A. Givens was also selected as a semifinalist for the Class A Mr. Football award.