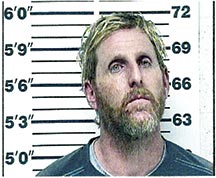 ONE CHARGED AFTER POLICE PURSUIT

Matthew Alan Callaway, 42, Alexandria, who tried to evade the sheriff’s deputy K-9 unit, resulting in a pursuit, faces a host of charges. While on patrol, K-9 Deputy Ridge Long attempted to conduct a traffic stop on a vehicle which failed to stop at a stop sign located at the intersection of Bluebird Road and Brush Creek Circle in the Brush Creek community.

According to an offense report filed by Deputy Long, “Upon activating my emergency equipment, the vehicle failed to yield and began to speed up. At this time, I initiated a pursuit. After several minutes, the vehicle crashed into a fence at the intersection of Highway 53 and Highway 70 in DeKalb County.”

When Deputy Long and Officer Travis Hawkins, with the Alexandria Police Department (responding as backup), attempted to take the driver of the vehicle into custody, he began to “physically resist and had to be physically restrained”, according to the officer’s report.