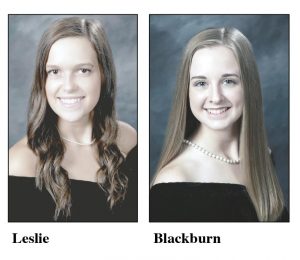 Grace Elizabeth Leslie has been named valedictorian and Rebecca Blackburn salutatorian of the 2018 graduating class of Gordonsville High School, Principal Shane Vaden announces. Grace Elizabeth Leslie is the daughter of Brian and Julie Leslie of Hickman. The granddaughter of Gerald and Shenia Bush, and Robert and Ann Leslie. She is a member of Hickman Baptist Church. Grace has been involved in the National Beta Club, Interact Club, Blue and White Club, Fellowship of Christian Athletes, 4 year member of the volleyball team, 4 year member of the softball team, 3 year member of the basketball team. Her honors include senior class homecoming representative, Tennessee Scholar, volleyball 2016 and 2017 all district team, and 2017 District MVP, softball 2017 all district team and received the Adam Hearn Award in the 6th grade. She frequently volunteers with her church group, VBS and the interact club. Grace plans to attend Tennessee Tech University and pursue a career in the medical field.

Rebecca Blackburn is the salutatorian of the 2018 graduating class of Gordonsville High School. She is the daughter of Ken and Laura Blackburn of New Middleton. The granddaughter of Bobby and Peggy Blackburn and Mark and Ferril Coffin. She is a member of First Baptist Church of Gordonsville. Rebecca has been involved in the Beta Club, Blue and White Club, FFA and Interact Club, 4 year member of the volleyball team, 2 year member of the basketball team. Her honors include co-president of FFA chapter, volleyball 2nd team all district. She frequently volunteers with the Interact Club. Rebecca plans to attend University of Tennessee Knoxville and pursue a career in biomedical engineering.

READ ALL THE TOP GHS STUDENTS IN THIS WEEKS COURIER!