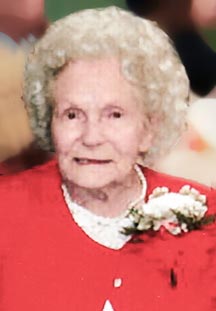 The last living member of the Carthage High School class of 1936 and centenarian Louise Maggart, a longtime resident of the Tanglewood Community, died at 1:30 a.m. Wednesday morning, March 28, 2018 at the Concordia Nursing and Rehabilitation of Smith County where she had made her home since November 19, 2015. Mrs. Maggart was 101.

Born Mary Louise Wright on the family farm in the Tanglewood Community on February 15, 1917, she was one of five children and was the daughter of the late Mr. William Elonzo “W.E. Will” Wright, who died on January 12, 1965 at the age of 84 and who was a founding stockholder and the first president of the Citizens Bank in Carthage and Mrs. Minnie Wesley Hackett Wright, who died July 17, 1973 at the age of 86.

In Carthage on January 2, 1938, she was united in marriage to Maggart Community native A.V. Maggart who would precede her in death on April 14, 1981 at the age of 62 following 43 years of marriage.

She was a homemaker and attended the Carthage First Baptist Church.

For her 100th birthday celebration Mrs. Maggart had recounted the things in her life she remembered and in this obituary we reflect on those to let those who read and save it what life was like in the earlier years in Smith County. In the 1920’s she remembered she and her sister Nell taking water to the Taylors Branch Landing to meet Billy Hull, Cordell Hull’s father, who came from Celina to visit. All the area livestock was herded on that boat, from which the boat whistle could be heard for miles up the Cumberland before arriving at Tanglewood, to ship to Nashville to be sold. Carthage still had gravel streets, she was 3 or 4 when her father got their first car for $400.00, a Model T Ford, which had snap on curtains and in the winter the ladies & children had lap rugs to keep warm since there was no car heater. She reflected that also in the 20’s she would ride the train to Nashville and change trains to continue on to Bellevue to meet her grandfather Wright who would pick her up at the Bellevue Train Station in a Dodge Touring car. She would go travel by horse and buggy to Cox’s Millinery Shop in Hartsville to buy new hats and in the late 20’s her father and the neighboring farm owner Mr. Kirk Savage bought a school car for the children to travel from Tanglewood to Carthage and the driver was Mr. Savage’s 10 year old son, Kirk Savage Jr.

In the 1930’s Mr. Wright bought the families 2nd car a Durante which had glass windows which amazed the children because they would roll up and down and had a heater. The family had a Delco Lighting System installed in their home and was the first family in Tanglewood to have a radio and on Saturday night all the neighbors would come to their home and listen to Uncle Dave Macon and the Grand Ole Opry. It was in the mid 30’s Mrs. Louise got her first perm at a cost of $2.50 given by Miss Bess Hackett at Miss Hackett’s shop which was in the first room on the right inside the front door of the Walton Hotel and in the same time frame the Wright family installed running water into their home which was piped from a cistern. Their groceries were purchased from the J. R. Smith Grocery which was located across the street from the present sight of Wilson Bank and Mr. Smith’s home stood where the bank now is located.

In the 1950’s the Chambers Dry Goods Store on the Carthage Square sold piece goods because most of the clothes were made at home. Mrs. Maggart’s main hobby was sewing in which she started making her doll clothes by hand when she was only 8 years old. She learned this by watching her mother who made the family clothes and in high school Mrs. Louise made most of her clothes and because of this over the years she became a perfect seamstress.

A life well lived with lots of blessings from her heavenly father.

As with many of us we have favorites and Mrs. Louise favorite color was red and her favorite flower was the poppy.