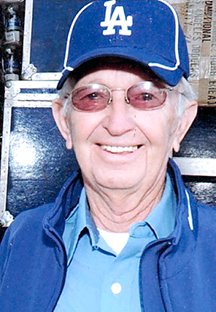 Mr. James Hall of the Hickman Community died at 0945p.m. Tuesday evening May 29, 2018 at the age of 83 at the TriStar Centennial Medical Center in Nashville where he was admitted May 22nd suffering from a weakened heart condition.

His minister Edward L. Anderson officiated at the Friday morning June 1st funeral services from the Carthage Chapel of Sanderson Funeral Home. Following the 11 a.m. services burial was in the Gordonsville Cemetery.

Born James Harlon Hall in Gainesboro on April 24, 1935, he was one of three sons of the late Allison C. Hall and Fannie Lou Williams Hall.

Also preceding him in death was a son, Jerry Harlon Hall who died as an infant.

Mr. Hall was a 1953 graduate of Jackson County High School.

He was a member of the Carthage Church of Christ.

Mr. Hall was a retired tractor trailer driver and before retiring in 2014 at the age of 79 he was the driver for the Los Angeles Dodgers transporting their team equipment from Los Angeles to Vero Beach, Florida for spring training and then return the gear to Los Angeles for their regular season play.