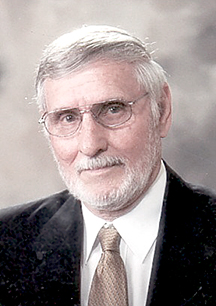 A highly decorated World War II Army Veteran, Mr. Bill Harwell of Carthage, died at the age of 93 at 9:32 p.m. Saturday evening June 9, 2018 at the Riverview Regional Medical Center in Carthage where he was admitted Thursday afternoon June 7th from his Park Avenue home suffering from complications of pneumonia.

The only boy of nine children, he was the son of the late Hugh Conway Harwell who died at the age of 73 on July 11, 1967 and Alice Elizabeth Harwell who died in 1928 when Bill was 3 years old.

He was born William Emerson Harwell in the Pisgah Community near Pulaski in Giles County, Tennessee on May 7, 1925. The step-mother that was a part of his growing up life was Mrs. Lillian Beard Harwell who predeceased him.

He was united in marriage on June 23, 1990 at the Christ Church Pentecostal Church in Gordonsville by then pastor Bro. Arnold Dugan to the former Olene Butler Grisham.

Mr. Harwell was employed for ten years with the Tennessee Home Improvement Co. before retiring in 1990.

He was of the Pentecostal faith.

Mr. Harwell proudly served our country with the United States Army during World War II and was inducted at Fort Oglethorpe, Georgia on July 30, 1943 and was honorably discharged at Fort George D. Meade Maryland on March 21, 1946 having served combat duty in the Rome-Arno Campaign and had total overseas service of five months and thirteen days and had total military service of two years, seven months and eighteen days.

He was assigned to the Company C, 168th Infantry Regiment and received wounds in Italy on May 26, 1944.