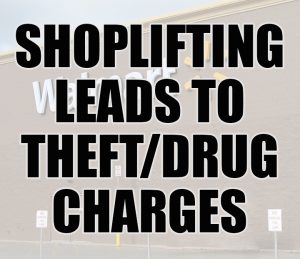 A man and woman both from Carthage face theft and drug charges after a shoplifting scheme at Walmart.

The incident began when sheriff’s department k-9 Deputy Ridge Long was dispatched to the department store after the two individuals, inside the store, were reported acting “erratic”. The two individuals were observed for about an hour taking items from shelves and placing them in a shopping cart.

At one time the female removed a pair of flip-flops from a shelf, trading them with the shoes she was wearing, according to offense report filed by Deputy Long. According to the report, the male individual “walked past the last point of sales and out the store’s front door with a black car battery.”

The female walked out “the store’s fire exit with a shopping cart full of merchandise which had not been paid for”, according to the report. The female was spotted running in the parking lot and after a short foot pursuit was apprehended by deputies.