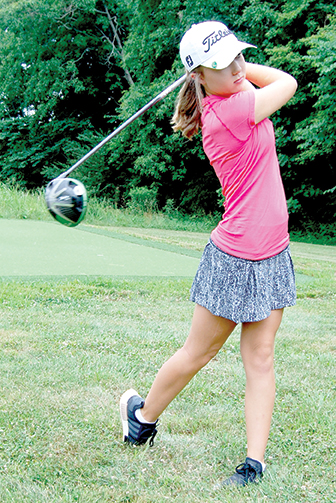 Sophie Linder has won more than two dozen golf tournaments over the past six years, thus she’s accumulated a small galaxy of first-place trophies, but her new, bright red Ping golf bag is likely the sweetest of them all. With scores of 72, 69 and 68, a one-under total, the South Carthage 13-year-old captured first place at the Mahoning Valley Hospital Foundation Junior All-Star Tournament in Boardman, Ohio, the week of June 11.

The America Junior Golf Association (AJGA) event featured 48 of the best girl golfers, ages 15 and younger, from around the world. Describing how she felt after the biggest win of her young career, Sophie said, “I was kind of overwhelmed. I didn’t know what to think. It was definitely crazy.” Sophie, who turns 14 on July 21, is no Janie come lately to the sport. She’s been swinging a golf club since age 7.

Over the past 12 months, she has made two holes-in-one, and in Nashville on June 5, she shot a 10-under 62 to set a Tennessean/Metro Parks Schooldays qualifying stroke-play record and tied the McCabe course record. “The course played short, more of a middle-school yardage. I hit it good and was playing well.

I lost to a good friend in the semifinals,” she said modestly of the match-play event. Before the year winds down, Sophie will have competed in about 25 tournaments across the country, most of them east of the Mississippi. On Monday, she was one of 144 to tee off in the Girls Junior PGA Championship at Kearney Hill Golf Links, in Lexington, Ky.