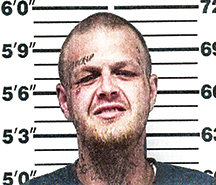 A man who was the subject of a pursuit and manhunt involving multiple law enforcement agencies after fleeing police is in the county jail. Randy Austin Pruitte, 28, Watertown, was charged with two counts of reckless endangerment, burglary, theft of property and fraudulent use of a credit/debt card by the sheriff’s department.

Shortly after the incident was reported, Carthage officers John Baiera and Sgt. Jared Smith initiated a pursuit with the vehicle (believed to be involved in the theft) which had two occupants inside, according to Deputy Bellar’s offense report.