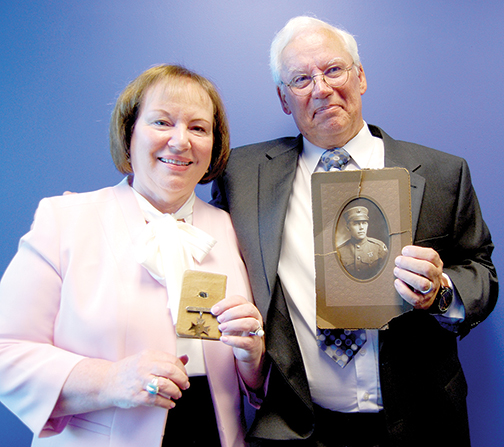 A century old, khaki-covered paperback New Testament along with a cross-shaped medal and a disfigured metallic slug embedded in the small book make an almighty case for the power of prayer and divine intervention. These family heirlooms, treasured by Lebanon native Andy Austin, help preserve the miraculous story of his grandfather, Thell Ross Neal, a Marine whose life was spared by the Good Book 100 years ago, on Sept. 15, 1918, during trench warfare in France. One of Austin’s earliest childhood memories, burned clearly in his mind, centers on his mother and her sisters all hugging and crying while holding the tiny New Testament they pulled from a trunk.

“Without the word of God I wouldn’t be telling this story,” said Austin, who was a year old when his grandfather died. “His first child was Frances, my mother. Mama really loved him and talked about him a lot. I feel like I know him from what she and my grandmother told me.” Neal was born March 5, 1891, to Albert Sydney Johnston Neal and Hollena Procter Neal on their farm in Grant. In his early 20s, Ross moved to Winterville, Miss., to work with his brother, Mack, on a cotton farm.

Known affectionately as “Daddy Ross” to his children and grandchildren, Neal labored beside his brother until 1918 when America entered World War I.