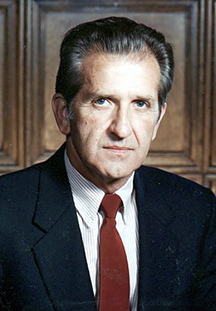 Mr. Jim Huddleston, of the Stonewall Community, a retired corporate pilot, died peacefully Wednesday morning September 12, 2018 at 12: 25 a.m. at his Sonterra Farms home with his loving wife and family by his bedside. Mr. Huddleston was 85.

A Celebration of Mr. Huddleston’s Life from the Carthage United Methodist Church was conducted Saturday afternoon September 15th at 1 p.m. with the church pastor Rev. Monica Mowdy the celebrant. Eulogies were delivered by Steve Gregory, President of Averitt Air, Dr. Wanda Webb from Vanderbilt University, and Kevin Young with Wauford Engineering. Interment followed in the Huddleston family lot at Baird Memorial Cemetery in the Hickman Community.

On June 8, 1968 at the Belmont Heights Baptist Church on Belmont Blvd. in Nashville Mr. Huddleston was united in marriage to Nashville singer the former Lee Miles.

Jim moved to Carthage with his parents when he was four years old.

football scholarship. Voted most athletic boy in his senior class, he served as president of the Spanish club, vice-president of both the drama club and “C” club. As an athlete he played on the undefeated senior basketball team and was captain of the Owls football team his senior years.

He proudly served our country with the United States Army and was honorably discharged at Fort Sheridan, Illinois and throughout his tenure during the Korean Conflict was gun commander with the Battery “B” 496 Anti-Aircraft Arterially Battalion based out of Chicago, Illinois and afterward began his pilot training, eventually earning his Airline Transport Rating. For his unselfish service he was awarded the National Defense Service Medal.

He loved aviation and loved telling stories about flying, but mostly he loved mentoring young pilots, male and female, giving them time in the airplane and helping them to become proficient. He knew that if they felt confident in their abilities, landing in a severe crosswind for example, they would be safer pilots overall.

Jim embraced jet aircraft as early as 1967, becoming one of the first in Nashville Corporate Flying to fly jets. He flew model number 4, a 23 model Lear Jet, and later flew model number 56 for many years. He flew most of the Lear models moving up to the model 45 XR where, at the age of 73 he had to go through another Initial Training Course for certification on the 45 and once again at the age of 76 he gained certification for the Falcon 50 EX. He flew Falcons 10, 20, 50, 50EX and 900EX. He retired from flying at the age of eighty with over 33000 flight hours, half of them in high performance jets.

Jim introduced Brian to aviation, and to fishing and hunting. They had many training flights that Brian loved and Jim taught Brian to hunt deer, turkey and other wild game. He also taught him to fish for bass and redfish and eventually trout. Jim had fished the Snake River on the Cheek Ranch at the base of the Grand Tetons; he had fished the Hoe River with professional guides for steelhead; and he had hunted the prairies of Nebraska for pheasant and quail.

He loved hunting, fishing, playing tennis, carving ducks, and writing novels. He published several magazine articles, (one on the front page of Aviation International) as well as three novels: RUBE, ADIÕS, SEÑOR, and MURDER OF A FED. Jim was a gifted storyteller and loved to tell stories of his adventures, in flying especially. He and his wife Lee traveled extensively in Europe, Iceland, Mexico, Canada and almost every state in the US. They enjoyed the personal aspects of corporation aviation; Jim flew and became friends with many politicians, businessmen, and entertainers; Dr. Walter Courtenay, former minister at First Presbyterian Church in Nashville, Tom Cummings, Jr., Calvin Houghland of Bright Hour Farms, Guilford Dudley and more recently, Lee Beaman, all of Nashville, Pete Knowles of Uvalde TX and Tom Turner of San Antonio, TX, former Presidents George W. Bush and Lyndon Johnson, Seymon Deustche, a champion bridge player and owner of Joe Brand Stores in Laredo TX and actor Omar Shariff, as well as many musicians.

At the very end of his career Jim was chief pilot and director of aviation for Brad Paisley, managing his flight department until the age of eighty-three.

Mr. Huddleston was a member of the First Presbyterian Church in Nashville and for the past twenty years since living on their Sonterra Farm he and Lee have attended the Carthage United Methodist Church.

Surviving in addition to his wife of over fifty years are two sons, Brian Howard Huddleston and fiancée Vickie of the Stonewall Community, Steve Huddleston of Columbia; brother, retired Sweetwater Electric System manager Bill Huddleston of Sweetwater, TN and his children, Celia Huddleston Harrison and husband John of Philadelphia, TN; Terry Huddleston and J.A. of Tupelo, Mississippi; brother-in-law, Bob Vetter of Hixson and his children Jamie Vetter and wife Angie, Shauna Vetter Wilson all of Chattanooga; several grandchildren and great-grandchildren.