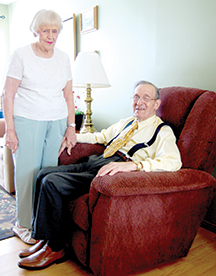 United in faith, hope and love, Lebanon’s Jean and Bob Reynolds have shared a lifetime of ups and downs, but mostly ups, since the day they swapped wedding vows on Aug. 11, 1951. However, over the past 14½ years, Jean has witnessed a slow-burning fade in Bob’s personality as Alzheimer’s disease has snatched away a treasure store of precious memories and snuffed out his vitality.

According to the Alzheimer’s Association, those with the disease live an average of eight years after their symptoms become noticeable to others, but survival can range from four to 20 years, depending on age and other health conditions. Jean said that Bob’s physician told her that Bob’s 14 years with Alzheimer’s is the longest case he has treated.

Diagnosed with the illness in December 2003, Bob, who turned 87 on Aug. 31, was once a superb singer, avid photographer, handyman and mechanic and served as a preacher in seven Church of Christ congregations across a span of nearly 30 years. He is one of 5.7 million Americans who have been ambushed by Alzheimer’s.

That number is predicted to rise to nearly 14 million by 2050. Jean, 88, is one of 16.1 million Americans providing unpaid care for those with Alzheimer’s or other dementias.

In describing Bob’s personality before Alzheimer’s crept into his life, Jean said, “He was outgoing and jovial. Sometimes it almost embarrassed me because he would laugh so loud at things. He was so pleasant. There were some shows on TV like the home video programs. He really got a kick from those. Now he is more or less quiet. He sleeps at least 16 hours out of every day, and I seldom ever get a response out of him. If there’s music on, he keeps time on his chair arm.”