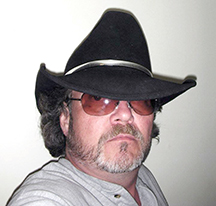 A memorial service will be conducted on Tuesday afternoon, November 27, at 4:00 p.m. from the Carthage First Baptist Church with Dr. Tim Frank officiating. The family will receive friends at the Church from 2:00 p.m. until service time at 4:00 p.m.

Born on October 1, 1960 in Cincinnati, Ohio, he was preceded in death by his mother, Mary Cochran Roberts and by his adoptive parents Edward and Rosemary Noll Hoffman.

Also preceding him in death was a sister, Debbie Hoffman.

On February 14, 2005 in Cookeville he was united in marriage to the former Alicia Rocheleau, who survives.

Mr. Hoffman grew up in Cincinnati and graduated from Colerain High School.

His work career began with the Kroger Co. in Cincinnati before opening a western store in Indiana.

Later he moved to Kingston Springs, Tennessee and opened a car wash before opening other businesses Nashville and also became a bounty hunter under the pseudonym Sam Roberts.

Mr. Hoffman was a long-time business owner and entrepreneur, having operated Hoffman Professional Services in Nashville as well as Hoffman’s Thrifts and Gifts and Hoffman Auction House in Smith and Wilson Counties.

The family requests no flowers, and respectfully requests memorials to help with expenses.