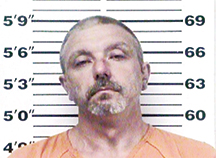 A man has been indicted on two counts of attempted first degree murder for allegedly shooting at two deputies. A 10 count indictment was handed down by the grand jury on December 3 against Steve F. Mabe, Jr., 44, Smithville.

In addition to firing at officers, Mabe is charged with illegal possession of various drugs, unlawful possession of a weapon, theft of property and evading arrest.

The indictment alleges Mabe attempted to kill sheriff’s department Sgt. Jimmy Gregory and Deputy Nick Campbell during an incident which occurred on October 5, 2017, on Ward Hollow Road near the Brush Creek community.