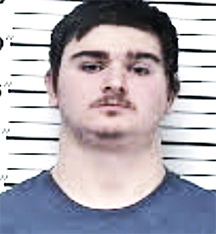 A man faces charges after allegedly having a sexual encounter with a female relative who is a minor.

Billy Bray Fann, 19, Whitleyville, has been charged with statutory rape and incest.

Charges were filed by the sheriff’s department’s detective division on December 19.

According to an affidavit of complaint, Fann admitted to the incident.

The incident allegedly occurred in the Defeated community.