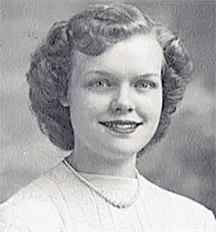 Mrs. Ann was born October 7, 1932 in Lancaster, TN, a daughter of the late James Roy Parkerson and Fannie Bell Moss Parkerson. She was also preceded in death by Brother-in-Law; Thomas L. Nixon. Mrs. Williams married James D. “Brownie” Williams on October 13, 1951 in Springfield, TN, and he preceded her in death on February 4, 2015.

Mrs. Williams was a 1951 graduate of Gordonsville High School. After high school she worked at the shirt factory and as a homemaker. Later she owned and operated Ann’s Antiques and Collectibles for several years. She was a Baptist.

Funeral Services for Mrs. Williams are scheduled to be conducted from the Gordonsville Chapel of Bass Funeral Homes on Monday, January 21, 2019 at 1PM with Browning Maggart delivering the eulogy and Bro. Bill Parkerson officiating. Interment will follow in the Gordonsville Cemetery.

Visitation with the Williams Family will be at the Gordonsville Chapel of Bass Funeral Homes on Sunday from 2PM until 7PM and on Monday from 10AM until service time at 1PM.