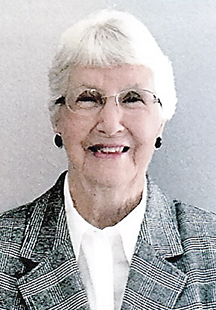 Mrs. Doris Swann Wood of Lafayette and a longtime resident of the Defeated Creek Community died peacefully at the age of 85 at 8:45 a.m. Saturday morning February 2, 2019 at the Sumner Regional Medical Center in Gallatin where she was admitted January 24th. She had suffered a stroke at her home in Lafayette on December 2nd of last year.

Her Pastor, Eld. Jeff Patterson, officiated at the 1 p.m. Tuesday afternoon February 5th funeral services from the Hackett Chapel of Sanderson Funeral Home. Burial followed beside her husband in the Garden of the Cross at the Defeated Creek Memorial Gardens.

She was united in marriage to Wartrace Community native Bobby Clay Wood at the home of her sister and brother-in-law, Nancy Swann McCall and Bobby Hugh McCall on December 22, 1956 by United Methodist minister Bro. Harold Dean Ray.

Mr. Wood preceded her in death on October 30, 2012 at the age of 80 following almost fifty six years of marriage.

Mrs. Wood was a bookkeeper for the former 1st American National Bank in Nashville until the birth of their daughter in 1962.

She was a 1952 graduate of Smith County High School where she majored in Home Economics, was a member of the press club, the record and music club, a member of the Owl Staff her senior year, was the sophomore class secretary, served as her junior class reporter, and was the Future Homemakers of American queen attendant her junior year.

Mrs. Wood was a faithful and dedicated member of the Friendship Primitive Baptist Church in the Defeated Creek Community.

The Wood family has requested memorials to the Friendship Primitive Baptist Church.