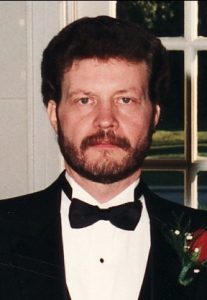 Mr. Scottie Carter of the Watervale Community was found deceased at his County House Circle home on Friday morning February 22, 2019. He was pronounced dead at 11:30 a.m. at the Riverview Regional Medical Center in Carthage at the age of 58.
His pastor Eld. Junior Dickerson and the Carter family’s close friend, Eld. Stephen Brooks officiated at the Monday afternoon February 25th funeral services from the Carthage Chapel of Sanderson Funeral Home. Following the 1 p.m. services burial was in the Garden of Everlasting Life at Smith County Memorial Gardens.
The youngest of four sons and one daughter, he was the son of well-known Missionary Baptist minister Bro. Harold Edward Carter who died November 4, 1997 at the age of 81 and the late Ruth Ferrell Shoemake Carter who died May 12, 2013 at the age of 87.
A brother, Harold Terry Carter, died as the result of a single vehicle automobile accident in the Popes Hill Community on August 6, 2000. He was 48.
Mr. Carter was a member of the class of 1978 at Smith County High School where he received his General Education Degree.
He was saved at the age of 13 and was baptized into the full fellowship of the South Carthage Missionary Baptist Church.
Mr. Carter was a security guard at Nyrstar Zinc Mine in Gordonsville under contract to Allied Universal Services.
He is survived by a sister, Debbie Carter Minchey and husband Roy of South Carthage; two brothers, Smith County Emergency Management Agency Director Sonny Carter and his wife Peggy Alvis Carter of the Flatrock Community; Randy Carter of Carthage.
The Carter family requests memorials to either the Smith County Rescue Squad or the Rock City-Rome Fire Department.