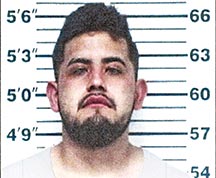 Bond has been set for a second suspect charged in the murder of two men found dead at an unoccupied house on Dillehay Hollow Road in April of last year. Alain Benitez, 18, Wilson County, appeared in criminal court Thursday before Judge Brody Kane asking for a bond to be set. Benitez had been held without bond since his arrest in June of last year. Judge Kane set Benitez’s bond at $500,000, according to Assistant District Attorney Jack Bare. If Benitez posts bond, immigrations has a hold on him, according to the assistant district attorney.