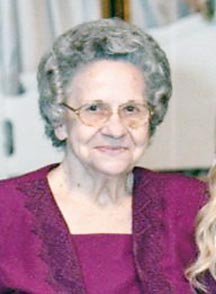 Mrs. Florence Shoulders, of the Graveltown Community, died at the age of 82 at her Bishop Hollow Lane home with her family at her bedside at 10:30 p.m. Friday evening March 15, 2019. She was pronounced deceased at 12:11 a.m. Saturday morning by HighPoint Hospice of Gallatin.

Her longtime pastor, Eld. James Thomas Gibbs, and Bro. Jackie Dillehay officiated at the 1 p.m. Monday afternoon March 18th funeral services from the Carthage Chapel of Sanderson Funeral Home. Burial was beside her husband of over forty four years at the Beasley Cemetery in the Graveltown Community.

Mrs. Florence was preceded in death by a sister, Reba Nell Ballinger Underwood and by a brother, Carl Ray Ballinger who died July 1, 2012 at the age of 73.

On September 21, 1956 she was united in marriage in Ringgold, Georgia to Graveltown Community native Rex Johnson Shoulders. He preceded her in death on November 22, 2000 at the age of 68. The witnesses at their wedding were Jack Dillehay and Kasel Woodard just a year before Jack and Kasel married.

Mrs. Shoulders was saved at a revival meeting and was baptized into the full fellowship of the Mt. Tabor Missionary Church at Pleasant Shade in July of 1958.

She was a longtime employee at the former Carthage Shirt Corporation and later before retirement in 1995 at Trousdale Manufacturing in Hartsville.

The Shoulders family requests memorials be made to the Beasley Cemetery Mowing Fund.