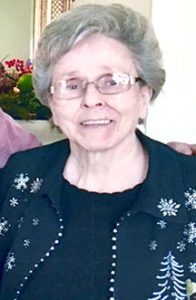 A longtime Frog Branch resident of the Graveltown Community has died at the age of 74.

Mrs. Pat Gregory was pronounced deceased at 12:15 p.m. Saturday afternoon March 16, 2019 at the Tennova Healthcare in Lebanon where she was admitted and suffered a head injury incurred from an accidental fall.

Funeral services from the Carthage Chapel of Sanderson Funeral Home were conducted on Tuesday morning March 19th at 11 a.m. with her former pastor of over thirty one years, Eld. James Thomas Gibbs, officiating. Burial followed beside her husband in the Pleasant Shade Cemetery.

Born Patricia Jean Morrow in Red Boiling Springs on March 7, 1945, she was the daughter of the late U. S. Army Technician 5th Grade James Prentice Morrow who died in World War II on November 4, 1944 at the age of 31 and Brittie Hudson Morrow Wilmore who died October 11, 2000 at the age of 78.

Her step-father, retired Pleasant Shade Community merchant, Presley Wilmore, died at the age of 81 on September 30, 1983.

In Celina on Saturday January 28, 1961, she was united in marriage to Graveltown Community native Bobby Hugh Gregory who preceded her in death at the age of 67 on August 12, 2007.

Mrs. Gregory was formerly employed at the former Carthage Shirt Corporation and before her husband’s death was actively engaged as a farm wife on the family farm.

She was saved and baptized into the full fellowship of the Mt. Tabor Missionary Baptist Church in the Pleasant Shade Community in July of 1959.