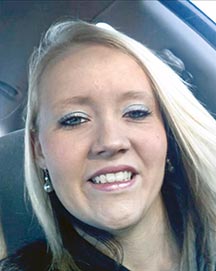 Ms. Tiffany Barnes, age 27, of Fairgrounds Lane in the Highland Community was pronounced dead at 7:14 a.m. Saturday morning March 16, 2019 at the age of 27 after suffering an apparent asthmatic attack while visiting family in the Enigma Community.

Ms. Barnes was at the Carthage Chapel of Sanderson Funeral Home. Graveside services were conducted at 3 p.m. Wednesday afternoon March 20th at 3 p.m. with Bro. Terry Fessler officiating. Interment followed in the Madewell family lot in the Garden of Peace at Smith County Memorial Gardens.

She was born Tiffany Lee Barnes at the former Carthage General Hospital in South Carthage on July 11, 1991 and was the daughter of the late Ruby Leann Madewell who died at the age of 34 on April 1, 2005 and Timothy Wayne “Tim” Barnes of the Dyers Branch Community.

Ms. Barnes was a 2009 graduate of the Gordonsville High School.

She formerly was employed at Shiroki in Gordonsville.

Ms. Barnes was a member of the Macedonia Baptist Church in the New Middleton Community.