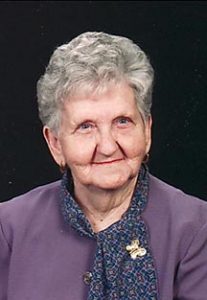 Mrs. Opal Butler Agee, age 96, of Carthage and a longtime resident of the Bagdad Community died at 1:38 Wednesday morning May 20, 2019 the Concordia Nursing and Rehabilitation Center in Carthage where she had made her home since October 23, 2014.

Friday morning May 22nd funeral services from the Hackett Chapel of Sanderson Funeral Home were conducted by Edward L. Anderson with Guy Holliman delivering the eulogy. Burial followed the 11 a.m. funeral services in the Gene Butler Cemetery in the Brooks Bend Community.

Also preceding her in death was her oldest child, James Agee who died at the age of 75 on January 23, 2017.

In 1993 she retired from the Carthage Shirt Corporation where she had been employed since 1960.