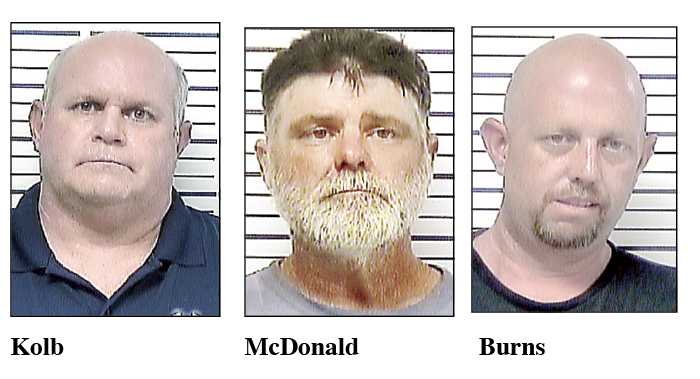 Three people have been indicted in connection with the April homicide of a South Carthage man. Meanwhile the district attorney’s office is not ruling out others may be charged, citing the investigation is ongoing. The indictments come after evidence in the case was presented to a Smith County Grand Jury on Friday, May 31, by a Tennessee Bureau of Investigation (TBI) special agent. On Monday, June 3, TBI agents, law enforcement officers with the Smith County Sheriff’s Department and Robertson County Sheriff’s Department began searching for the suspects.

Two were taken into custody by law enforcement authorities and a third surrendered. While two men face first degree premeditated murder charges, a third has been charged with accessory after the fact. Kenneth S. McDonald, 46, White House, and Jeffrey Ivan Kolb, 47, Greenbrier, were each indicted for first degree murder. James M. Burns, 44, Greenbrier, was indicted for accessory after the fact.

The assistant district attorney noted the investigation is still active and additional charges could be filed. McDonald was located at his residence in White House, while Burns was located in Cross Plains. With his attorney, Kolb turned himself in at the Smith County Sheriff’s office.