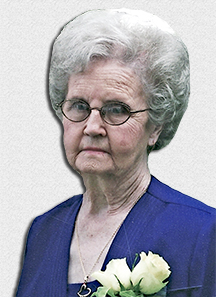 Mrs. Sue Cornwell Smith age 89 of the Pleasant Shade Community died at the Riverview Regional Medical Center in Carthage at 10:20 a.m. Wednesday morning June 19, 2019 where she was admitted Saturday afternoon June 15th following a fall which resulted in a fractured hip.

In Rossville, Georgia on Saturday December 11, 1948 she was united in marriage to Pleasant Shade Community native Georgia Kindred Smith who died September 1, 2007 at the age of 80.

Mrs. Smith was a member of the Ebenezer Missionary Baptist Church in the Sycamore Valley Community.

She was a 1948 graduate of the Trousdale County High School.

Mrs. Smith was employed at the former Carthage Shirt Corporation for over thirty seven years before her retirement in 1993.

The Smith family requests memorials to the American Cancer Society.