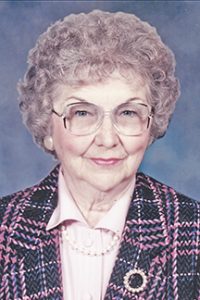 Mrs. Marianne Hiett Byrne of Cookeville and a longtime resident of Hendersonville died at 6:52 p.m. Sunday evening June 23, 2019 at the Morningside of Cookeville under the loving care of Avalon Hospice of Cookeville. Mrs. Byrne died two days before her 99th birthday.

Two brothers preceded her in death, James Gordon Hiett Jr. who died at the age of 86 on March 26, 2002 and William Kittrell “Bill” Hiett who is buried in Orange, Massachusetts where he died February 7, 1984 at the age of 57.

She was the widow of longtime Hendersonville farmer and sub-division developer John Marvin Byrne, a native of the Granville Community of Jackson County. He preceded her in death on July 11, 2006 at the age of 86 following just over sixty six years of marriage.

Together Mr. and Mrs. Byrne, who married at the Carthage First Baptist Church on June 29, 1940, developed Arrowhead Subdivision on Stop 30 Road in 1987. They operated a 100 acre Angus Farm there until 1986 and started the subdivision in 1987 and had sold all three hundred lots by 1992.

In her earlier years she was employed as a receptionist and secretary for Huffines & Dorris in Nashville.

Mrs. Byrne was a 1938 graduate of Carthage High School where she served as secretary of the junior class, and secretary-treasurer of her senior class. In her yearbook it was said of her: “We love her for her smile, her looks and her way of speaking gently.”

Also while at Carthage High School she was voted the Most Popular Girl her freshman year and again her senior year and after graduation, she was elected Miss Smith County in 1939, an honor she was most proud of.

She was a longtime member of the Hendersonville Church of Christ.

Being raised in the Town of Carthage, she often made the analogy of how Mr. Byrne transformed her from a city girl into a farm girl when they began operation of their Angus Cattle farm in Hendersonville in the 1940’s.