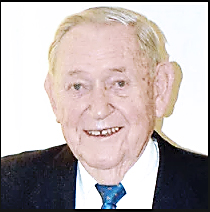 Bill was born on December 29, 1927, to the late Oliver Wendall and Gladys Inez Williams Gwaltney of Gordonsville, TN. In addition to his parents, Bill is preceded in death by his Brothers; J.W. Gwaltney and Howard D. Gwaltney, and Sister; Betty Jean Gwaltney.

Bill was born and raised in Smith County in Gordonsville, TN, and was a graduate of Gordonsville High School and Tennessee Polytechnic Institute, now Tennessee Technological University in Cookeville, TN. Bill was a sports person, having played football and basketball through-out high school in Gordonsville and an avid follower of local teams, especially Vanderbilt, as well as his grandchildren and great-grandchildren sports activities.

He loved to visit the Destin, FL, are for vacations and relaxation with his grandchildren and great-grandchildren. Bill was a member of the Shriner’s for many years, along with his father and brothers, as well as a long-time member of the Old Hickory Lions Club. Through-out his working career, Bill was health care and hospital supply sales person, first with Taffel Medical and later with Metro Medical. He and Miriam were also long-time residents of Old Hickory, TN, being the first family to move into the Brandywine Farms Subdivision in 1964, having lived in the Old Hickory Village for several years before that. They both were life-time members of the Old Hickory United Methodist Church.

Bill was a gentle, loving, caring person and will be missed by all those who loved him, came in contact with him, and just knew him in passing! His daily jokes, smile, and positive attitude affected all those who knew him and had dealings with him.

Funeral services for Bill will be held on Friday, June 28, 2019 12PM at the Old Hickory United Methodist Church with The Reverend David A. Winton officiating. Interment will follow at 3PM in the Gordonsville Cemetery in Gordonsville, TN.

Visitation with the family will be at the Old Hickory United Methodist Church on Friday from 10AM until service time at 12PM.

In lieu of flowers, donations can me made to the Alzheimer’s Association of Middle Tennessee. Special thanks to Alive Hospice.