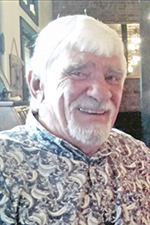 Mr. John Kruzan, age 79, of the McClures Bend Community was pronounced dead at the Tennova Healthcare in Lebanon after suffering a fatal heart attack after he and his wife had lunch at a Lebanon Restaurant. He collapsed to the ground upon leaving the restaurant.

At his request, Mr. Kruzan was cremated and that was performed at Cumberland Family Services in Algood.

One of two sons, he was born John Charles Kruzan in Terre Haute in Vigo County, Indiana on February 4, 1940 and was the son of the late Oscar Charles Kruzan and Katheryn May Talbott Kruzan.

On June 22, 1963 in Crafton, Pennsylvania he was united in marriage to the former Judith Ann Herman.

Mr. Kruzan was a 1958 graduate of New Concord High School in New Concord, Ohio, where he was an outstanding football player who received an offer from the Green Bay Packers, and in 1986 would be inducted into their New Concord High Hall of Fame for his work on the gridiron. He received his Bachelor of Science from Muskingum College, now Muskingum University, also in New Concord and furthered his studies at Utah State University in Logan, Utah where his career path was in Wildlife studies.

His first employment out of college was with the New York State Conservation Department and he later began work with the Tennessee Wildlife Resources Agency as Chief of the Bureau of Game.

In 1979 he accepted a position with Ducks Unlimited and continued with that organization until his retirement in 2002. He relocated his family to Smith County in 1979 and they purchased a farm on Lock 8 Lane in the McClures Bend Community which contained the historic Lt. Colonel Arasmus Hance House and continue to live there and where they reared their two sons, which both graduated from Smith County High School.

An avid supporter of the Boy Scouts of America and especially the Smith County program, he was totally devoted to the development of young lives.

He and his wife had been members of the Carthage United Methodist Church since 1980 where he served as chairman of the Trustees. Mr. Kruzan was very active at the church and especially overseeing the maintenance and beauty of the church and grounds.

A gentleman who was easy to make friends with, he became widely known and respected by his peers of the Defeated Creek Community, Carthage and McClures Bend Community and in reality with whomever he came in contact with.