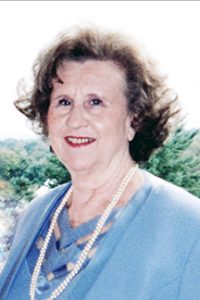 Mrs. Aubrey Matthews Cummings of Madison died at 2:49 p.m. Saturday afternoon June 29, 2019 at the TriStar Skyline Medical Center E. R. in Madison where she was admitted at 2:11 p.m. in a grave medical condition.

Her younger brother and only sibling, Gayle Ceron Matthews, died June 9, 2013 at the age of 72.

At the Fairview Baptist Church in Lebanon on October 20, 1956 she was united in marriage to Lebanon native Albert Roy Cummings.

Mrs. Cummings was retired from the Baptist Sunday School Board in Nashville and since retirement enjoyed being a homemaker at their Sun Valley Drive home in Madison.

Mrs. Cummings was saved at an early age and baptized into the full fellowship of the Peyton Creek Baptist Church in Monoville where she remained a member until death.

She was a 1955 graduate of Smith County High School where it was said of her in the Owl annual: “Your heart must ever cherish some faith at any cost.” She majored in home economics, played basketball, won the school spelling bee, was on the honor roll, a member of the glee and record club, the hobby club and the pep squad. She enjoyed traveling, listening to country music and baking and was passionate about gardening.