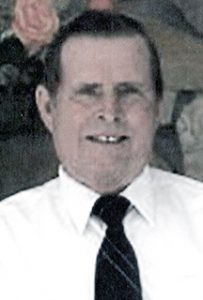 Longtime McClures Bend Community resident Mr. Bob Stamper died peacefully at 2:18 p.m. Wednesday afternoon July 24, 2019 surrounded by his family and close friends. He was pronounced deceased at 2:22 p.m. at the Sumner Regional Medical Center in Gallatin where he had been a patient since July 16th. Having been fitted with a pacemaker in 2017, he suffered from congestive heart failure.

Sunday afternoon July 28th funeral services from the Carthage Chapel of Sanderson Funeral Home were conducted at 1 p.m. with his pastor, Bro. Frank Bratcher, officiating. Burial followed in the Garden of the Cross at the Defeated Creek Memorial Gardens.

The son of the late Robert Thurston Stamper and Mildred Maxine Hagewood Stamper, he was one of four sons and was born George Robert Stamper in Hopkinsville in Christian County, Kentucky on December 13, 1939.

Mr. Stamper was retired from the former Service Merchandise Co. in Nashville

He was a 1959 graduate of Hopkinsville High School and in 1968 received his Bachelors of Science degree in education from Austin-Peay State University in Clarksville.

In 1972 he was awarded a Master degree, also in education, from Morehead State University in Morehead, Kentucky where he was a member of Phi Beta Kappa.

On July 6, 1960 he was licensed to preach the gospel ministry by the Casky Baptist Church in Hopkinsville, Kentucky and on April 19, 1964 he was ordained to perform the work of the ministry.

He formerly pastored churches in Kentucky and Tennessee.

Mr. Stamper was a member of the Carthage First Freewill Baptist Church in the Tanglewood Community.