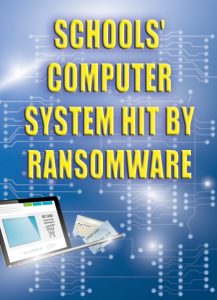 School officials say no sensitive information was compromised when the county school’s computer system was hit by ransomeware over the summer break. Meanwhile, as teachers and students report back from summer vacation this week, school officials aren’t anticipating any major problems with its computer system, as upgrades were made and additional safety features for better cybersecurity were installed over the summer.

Also, the Federal Bureau of Investigation (FBI) was called in when the incident occurred and an investigation is ongoing. Computers which were in use this summer were basically temporarily frozen when hit with the ransomeware, explained David Nixon, supervisor with the school system. The discovery was made on June 22 when an employee turned on a computer to find an encrypted message. Individuals were attempting to extort money from the school system by freezing its computer system.

“They don’t steal your information, they just keep you from getting to it,” Nixon explained.