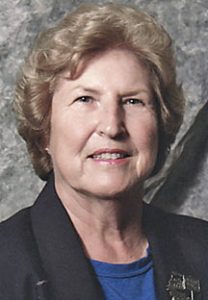 A retired Carthage business woman has died at the age of 78 following a thirty year battle with Parkinson disease.

Mrs. Dwin Wright died at 7:30 a.m. Wednesday morning February 5, 2020 at her Flat Rock Road home with her husband at her bedside. She was pronounced deceased at 8:30 a.m. by Avalon Hospice in Cookeville who had been assisting her family with her care.

At her request graveside services were conducted by Bro. Jeff Burton. Burial followed the 1 p.m. service in the Garden of Gethsemane at Smith County Memorial Gardens.

She was the daughter and one of two children born to the late Adron Lutrell Kemp who died August 21, 1991 at the age of 72 and Wandalene Sircy Kemp who died December 20, 2007 at the age of 89 and was born Dwin Bernett Kemp in the Buffalo Community on July 28, 1941.

On September 11, 1959 she was united in marriage to Flat Rock Community native, Wayne Russell Wright.

Mrs. Wright had been a licensed real estate agent in Tennessee since 1992. Due to her failing health she retired in 2010.

She was a member of the Carthage United Methodist Church.

Mrs. Wright was a member of the 1959 graduating class at Smith County High School where she majored in commercial and science.

Her activities included being in the band, chorus, spring festival, was a member of the Beta Club, and her senior year was on “The Owl” staff, was a cheerleader her senior year, and was a football queen attendant both her junior and senior year with her high school sweetheart, Wayne, who was co-captain of the football team and who would become her husband following their graduation.

Surviving in addition to her husband of over sixty years is their daughter, Pam Wright Knight and husband Jimmy of Donelson; grandson, Blake Hunter of the Flat Rock Community; brother, Terry Kemp and wife Denise Williams Kemp of the Buffalo Community.