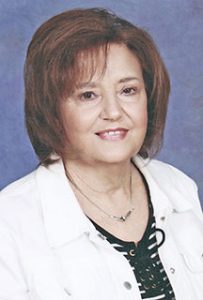 Mrs. Linda Alvis of the Flat Rock Community was discovered deceased by her son at her Flat Rock Road home on Saturday afternoon. She was pronounced dead on arrival at 1:52 p.m. February 8, 2020 at the Riverview Regional Medical Center E.R. in Carthage. Mrs. Alvis was 76.

Funeral services from the Carthage Chapel of Sanderson Funeral Home were conducted by her pastor, Bro. Wayne Malone assisted by Bro. Floyd Massey on Thursday afternoon February 13th. Following the 1 p.m. services burial was beside her husband at the Bethlehem Cemetery in the Tuckers Cross Roads Community.

On June 30. 1963 she was united in marriage to Bluff Creek Community native, Rupert Lee Alvis Jr. at the home of his parents and the ceremony was performed by the late Eld. Phocian Gibbs.

Mr. Alvis preceded her in death on June 10, 2001 at the age of 58 from injuries received in a construction accident just twenty days before their thirty eighth anniversary.

She retired following over twenty three years of employment for Dr. B. S. Howard in Lebanon where she was employed as a dental assistant and served as the office manager.

Mrs. Alvis and her late husband were members of the Carthage Chapter #190 Order of the Eastern Star.

The Alvis family requests memorials to either the Rome Baptist Church or the Bethlehem Cemetery Mowing Fund.