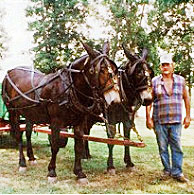 Jimmy was born July 30, 1941 in the Long Branch Community of DeKalb Co., TN, a son of the late Joe Alson Braswell and Doss June Denny Braswell. He was a graduate of Gordonsville High School. Jimmy worked and retired from the State of Tennessee working for TDOT in Smith Co. He was married to Rose Lee Moss Braswell in 1989 and she passed away on May 25, 2016. He attended the New Hope Baptist Church. Jimmy loved his mules and riding around in his wagon.

Visitation with the Family will be at the Gordonsville Chapel of Bass Funeral Homes on Tuesday from 4PM until 8PM and on Wednesday from 10AM until service time at 1PM.