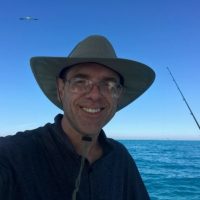 Mr. Wosak died peacefully with his family at his bedside on February 29, 2020 in Palmyra where he was born in 1966 and was a 1985 graduate of Palmyra High School.

As a teenager he was an avid skateboarder and while attending summer school at the Pennsylvania Academy of Fine Arts he discovered his lifelong passion as an artist.

In 1986, following high school, he proudly served our country when he joined the United States Navy and served on the USS Deyo (DD-989).

While in the Navy he served two deployments, one in the Mediterranean and the other in the Persian Gulf.

For his meritorious service he was awarded an Armed Forces Expeditionary Medal for combat duty in the Persian Gulf during Operation Earnest Will in 1988.

Following military service he attended the University of South Alabama for two years.

He then began touring with his best friend’s band, Loppybogmi.

At this juncture in his life he relocated to Nashville and started screen printing shirts and stickers for other local bands.

Following the breakup of the band he started a merchandising company, Everywear Printing, with the Loppybogmi bands former manager.

In 1998 he cofounded T-Bones Records with his friend Tim Ramenofsky. Their first release was in 1998 where he produced two songs.

The T-Bone record label would eventually release twenty two CD’s with the highlight of his career being his work on the Grammy-nominated album with Afroman. He eventually contributed artwork to over fifty releases by other bands.

Mr. Wosak then moved back to Philadelphia with the love of his life, Julianna Meadows. In 2002 they were married and they were blessed with a daughter, Jessica, who was born April 12, 2003.

His career continued as a graphic designer and web developer with FMP Media Corporation and then twelve years with Vanguard at their corporate university.

In 2018, he left Vanguard in order to return to his pursuits as an artist.

Surviving, in addition to his daughter, Jessica, and wife, Carthage native the former Julianna Meadows, who was the daughter of the late Mike and Libby Meadows, is his mother, Marcia Connolly; four sisters, Heidi Wosak, Karin Kane, Kirsten Connolly and Suzanne Parker, all of Pennsylvania.

This notice provided as a courtesy to the Wosak family.