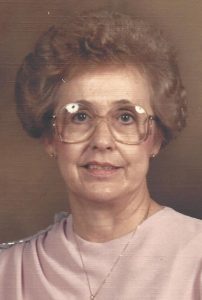 Mrs. June Clay Ray, age 89, of Gallatin died peacefully at 3:37 p.m. Tuesday afternoon, March 3, 2020, at the N. H. C. in Hendersonville where she had been cared for since January 9th of this year with a kidney disorder. She was under the tender care of Caris Hospice.

Funeral services from the Carthage Chapel of Sanderson Funeral Home were conducted at 11 a.m. Friday morning, March 6th, with Bro. Floyd Massey officiating. Burial followed beside her husband of over sixty eight years in the Beasley-Brooks section at the Dixon Springs Cemetery.

In Ringgold, Georgia on July 30, 1948, she was united in marriage to Kenneth Bonnell Ray, also a Difficult community native, who preceded her in death on September 5, 2016 at the age 88.

Mr. and Mrs. Ray were preceded in death by a son, Michael Stephen Ray, who died at the age of 55 on August 4, 2004, following a hard fought battle with cancer.

Mrs. Ray was an accomplished seamstress and was a member of the Gallatin United Methodist Church.