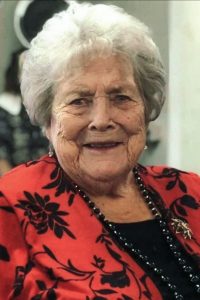 Mrs. Katherine Albritton, of South Carthage, died at her Davis Street South home at the age of 91, surrounded by her family. She was pronounced deceased at 7:03 a.m. Friday morning, March 6, 2020, by Caris Hospice of Cookeville who had been assisting her family with her care during her final days.

Eld. James Crawford officiated at the 3 p.m. Sunday afternoon, March 8th, funeral services from the Carthage Chapel of Sanderson Funeral Home. Burial followed beside her husband in the Gordonsville Cemetery.

Mrs. Albritton was united in marriage in Carthage on May 4, 1946 to the late Jessie Howard “Shorty” Albritton who preceded her in death on April 15, 2015 at the age of 88.

The marriage ceremony was performed by then Justice of the Peace, the late H. H. White, who owned and operated the Western Auto Store across from the Smith County Courthouse where the law offices of Robin Moore are presently located.

Mrs. Albritton was an accomplished seamstress and prepared delicious meals for her family and also for customers of the T-N-T Market in Gordonsville where she prepared home cooked meals for ten years.

Before beginning employment at the T-N-T Market she was also employed at the former Carthage Shirt Corporation for thirty six years.

Mrs. Albritton was a member of the former Bowlings Branch Church of God which was formerly located at the foot of Lancaster Hill.