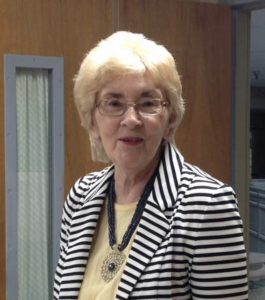 Edward L. Anderson and Bro. Kyle Beverly of Kingston, Tennessee officiated at the 7 p.m., Friday evening, March 6th funeral services from the Carthage Chapel of Sanderson Funeral Home. A neighbor and longtime family friend, Stan Webster, delivered the eulogy. Private interment services were beside her husband Saturday, March 7th, in the Garden of Gethsemane at the Smith County Memorial Gardens. Her son delivered the benediction.

She was preceded in death by a sister, Mildred Butler.

Mrs. McDonald was preceded in death by her husband, Charlie Glenn McDonald Sr., who died at the age of 34 on August 29, 1971, following a battle with cancer.

Mrs. McDonald was a 1959 graduate of Rowan County High School in Morehead, received her Bachelors of Science in business from Morehead State College, her Masters Degree from the University of Tennessee and her E.D.S. Degree from Tennessee Technological University.

Her career began at the Cumberland College in Lebanon where she taught business machines for six years before joining the Smith County school system.

After leaving Cumberland, she taught at the Smith County High School, and following the retirement of Arnold Reynolds at the vocational school, Mrs. McDonald became Director of the former Smith County Vocational School in South Carthage where she also taught business until her retirement in 2003.

She was a member of the Liberty Church of Christ at Granville.

Mrs. McDonald was a soft spoken woman with a gentle and loving spirit and was admired by all her students, fellow educators and with all whom she was associated with.

After retirement she was active in volunteerism, including the Riverview Regional Medical Center volunteers and a volunteer at Historic Granville, and every six months she attended a luncheon with the former students she taught while at Cumberland.