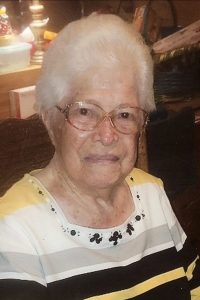 Mrs. Eva Wilburn age 100 of the Buffalo Community, a seventy year resident of the Wilburn Hollow in the Riddleton Community, died in her sleep at 8:40 a.m. Thursday morning March 19, 2020 at the home of her daughter, with whom she had lived and been cared for since 2010. She was pronounced deceased at 11:07 a.m. at the Riverview Regional Medical Center E.R. in Carthage.

Her pastor Eld. Rickey Brooks assisted by Eld. Larry Gregory officiated at the 1 p.m. Saturday afternoon March 21st funeral services which were conducted from the Carthage Chapel of Sanderson Funeral Home. Burial followed beside her husband in the Beasley-Brooks section at the Dixon Springs Cemetery.

The second of five children, three daughters and two sons born to the late Robert Allen “Rob” Earps who died May 20, 1968 at the age of 77 and Evie Boze Glover Earps who died January 13, 1976 at the age of 84, she was born Eva Frances Earps in the Lick Creek Community of Trousdale County on September 24, 1919.

She was united in marriage on December 24, 1939 on Lovers Lane North to Dixon Springs Community native Jack Greyson Wilburn who preceded her in death on April 24, 1987 at the age of 68.

They were preceded in death by a great-grandson Kyle Morris Floyd who died at the age of 5 days old on October 28, 1989.

Mrs. Wilburn was a 1933 graduate and the valedictorian of her graduating class at the former Maces Hill School.

At the former Cox-Davis Elementary School in the Riddleton Community, she was the lunch room superintendent for nine years and was later was employed as a seamstress at the former Carthage Shirt Corporation for four years and following retirement did seamstress work for family and friends.  As a former school cook, she was one of the first non-teachers to join the Smith County Retired Teachers Association where she was active in meetings for many years.

The Wilburn family requests memorials to either the Maces Hill Missionary Baptist Church or the Rob Earps Cemetery Mowing Fund.