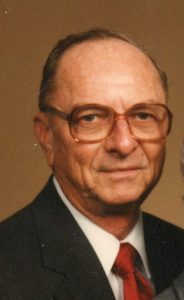 Growing up in Hickman, he graduated from Gordonsville High School and attended Tennessee Tech University.  He proudly served our country during World War II in the European Theatre, 34th Infantry Battalion where he was wounded in the battle of Little Anzio, Italy and received the Purple Heart.  He worked for the federal government as well as Metro Nashville government and retired from the office of the Metro Tax Assessor. A longtime member of Dalewood Baptist Church, he loved his church family and loved passing out candy to young and old alike.

In addition to his parents, he was preceded in death by his wife of 62 years, Elizabeth “Liz” Kittrell Hickey, brother, Leon Hickey, Dearborn, MI, and sister, Frances Young, Nashville.

A private graveside service, accompanied by military honors, will take place at Historic Spring Hill Cemetery with a Celebration of Life planned at a later time.

In lieu of flowers, memorial contributions may be made to Dalewood Baptist Church, 1586 McGavock Pk. Nashville, TN 37216.

Spring Hill Funeral Home and Cemetery in charge of arrangements