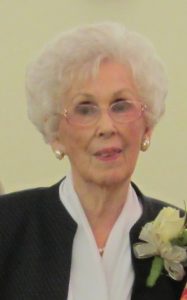 Mrs. Betty McClanahan Patterson, a homemaker of Hendersonville and Smith County native, went home to be with her Lord on Thursday, April 30, 2020 at the age of 89.

Private graveside services and interment were conducted Sunday afternoon at 3 p.m. from the Hendersonville Memorial Gardens. Her longtime pastor, Eld. Johnny Carver, officiated at the services.

On March 13, 1949 she was united in marriage to Paul Patterson who was later ordained as a Missionary Baptist Pastor and she was humbled to serve alongside him as he pastored several churches in the Middle Tennessee area.

They were highly respected by all the churches she and her husband served, and was thought of as the epitome of a Proverbs 31:10 & 11 wife, “Who can find a virtuous woman? For her price is far above rubies. The heart of her husband doth safely trust in her, so that he shall have no lack of gain.”

She graciously, with much pride, took care of her husband, her children, her home and her fellow church members with a fervent heart.

Mrs. Patterson had a long career with the Standard Candy Co. in Nashville and often reminisced about putting the peanuts into GooGoo Clusters.

After her husband returned from Korea she felt extremely blessed to be a homemaker and a caretaker for the family, providing a spotless house and home-cooked meals.

She and her husband maintained an award winning perfectly manicured and landscaped yard.

Mrs. Patterson was saved at a young age and at the time of her death had been a member of the McFerrin Missionary Baptist church for many years.