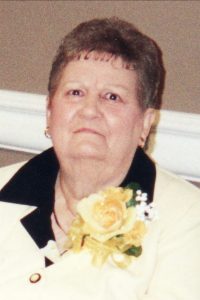 Mrs. Kathelene Grisham, age 84, of the Sullivans Bend community died at 2:31 a.m. Tuesday morning, May 12, 2020, on her sixty fourth wedding anniversary. She was a patient at the Riverview Regional Medical Center in Carthage where she was admitted May 11th.

Her pastor, Bro. Wallace Caldwell, officiated at the Thursday afternoon, May 14th, funeral services from the Carthage Chapel of Sanderson Funeral Home. Following the 1 p.m. services, burial was in the Grisham family lot in The Mt. Zion Cemetery in the Sullivans Bend community.

In the Horseshoe Bend community on May 12, 1956 she was united in marriage to Sullivans Bend community resident Fred Walker Grisham. They were married in a cornfield by then Justice of the Peace, the late R. C. Gibbs.

Also preceding Mrs. Grisham in death was a daughter-in-law, Sherry Marvine Lynch Grisham, who died on September 2, 2017 at the age of 59.

Mrs. Grisham was a member of the Mt. Zion United Methodist Church.

She was a longtime employee of the former Carthage Shirt Corporation and before retirement was employed by the Welch Company in Gordonsville.

Surviving, in addition to her husband of exactly sixty four years, are their three sons, Timothy Dwain (Tim Bo) Grisham of Carthage, Paul Grisham and wife, Ginny, of the Maggart community, Ricky Wayne Grisham of the Sullivans Bend community; sister, Darlene Dickens Shoulders and husband, Larry, of the Key Hollow in the Monoville community; five grandchildren and eleven great-grandchildren.