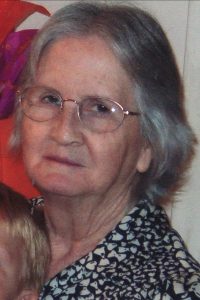 Miss Lucy Pearl Petty, of Lafayette and a longtime homemaker of the Russell Hill community, died at the age of 86 at 2:26 p.m. Saturday afternoon, May 16, 2020, at the Palace in Red Boiling Springs where she had made her home since October 22, 2009. After leaving the family home in the Russell Hill community in 1992, she moved to the Golden Oaks retirement complex in Lafayette.

Funeral services from the Carthage Chapel of Sanderson Funeral Home were conducted Tuesday afternoon, May 19th, at 1 p.m. by her pastor, Eld. Jason Goad. Burial followed in the Garden of the Cross at the Smith County Memorial Gardens.

She was preceded in death by an infant brother, William Howard Petty, who died July 14, 1928 at the age of eight months and by a sister, Willie Belle Petty Mathews, who died February 25, 1979 at the age of 49.

Miss Petty was saved at the age of 18 in August of 1952 and was baptized into the full fellowship of the Russell Hill Missionary Baptist Church where she remained a member until death.