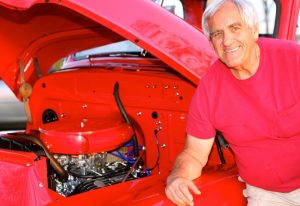 A graveside Celebration of his Life will be conducted on Friday afternoon, July 10th, at 2 p.m. in the Highers Family plot in the Gazebo Garden at the Dixon Springs Cemetery.

The Highers family were well known Dixon Springs community business men, with their father, Huck, owning and operating Highers Garage in Dixon Springs which was the Desoto and G M C truck dealer franchisee for Smith and Trousdale counties.

Mr. Highers was a 1960 graduate of Smith County High School where he majored in Foreign Languages. As a member of the high school chorus he sang in his senior year Spring Festival and was voted Mr. Bass singer his senior year

He was a member of the undefeated S. C. H. S. 1960 football team in regular season play and they were the Cumberland Valley Conference champions and the Upper Cumberland Conference champions, and living in Dixon Springs, Bill was most proud that they defeated Hartsville 6-0 in regular season. Bill was one of eight seniors on that 1960 winning conference team. They played in the Tobacco Bowl in Madison and were defeated by Sparta 7-0.

He played football all four years, was a member of the Latin, Spanish, and National Foreign Languages clubs, lettered in the “C” club his sophomore, junior and senior years. He played baseball his freshman and senior years.

Later, after graduation, he enrolled at Middle Tennessee State University where he played football until being injured in 1967. He then relocated to Missouri to pursue work opportunities.

In 1968, he married the former Patricia Nave and in 1976 they returned to his native Tennessee and resided in Gallatin, where he was employed in the automobile industry.

Always possessing an eye for business, which he probably inherited from his father, he began his own company, Nashville Auto Transport, and ran that endeavor until his retirement in 2003. He often would have to drive a transport himself when an employee was absent.  He had a work ethic to do whatever it took to take care of his customers.

Anything with a motor intrigued Billy, and he was an avid fan of cars and motorcycles and loved to rehab old cars and attend car shows to exhibit the fruits of his labors.

The Highers family request memorials to Safe Place for Animals, 905 Mallard Drive, Gallatin, TN 37066 or the charity of one’s choices.