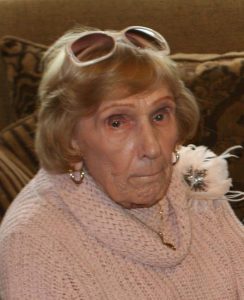 Mrs. Erlene (NeNe) Robinson, age 99, of the Pavilion in South Carthage, where she had made her home since December 14, 2018, died at 8:27 a.m. Sunday morning, July 5, 2020, at the Riverview Regional Medical in Carthage where she was admitted June 30th. For many years before moving to the Pavilion she made her home in the Morris Subdivision in the Tanglewood community. She was a lifelong homemaker.

Private graveside services for the family were conducted at 11 a.m. Tuesday morning, July 7th, with her pastor, Bro. Tim Frank officiating. Burial followed in the Robinson Family lot in section two of the Ridgewood Cemetery in Carthage.

Mrs. Robinson was the last known survivor of the 1940 graduating class of forty seven students of Smith County High School where she majored in home economics, was a member of the Lee Society, the commercial club and the expression club.

After graduation in May she was united in marriage in Tompkinsville, Kentucky on June 2, 1940 to Carthage native Walter King Robinson Jr., who preceded her in death on January 28, 2007 at the age of 83, following over sixty six years of marriage.

Mrs. Robinson was the oldest member of the Carthage First Baptist Church.

The Robinson family has requested memorials to the Carthage First Baptist Church.