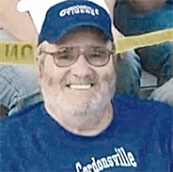 Mr. Malone was born November 26, 1936 in Gordonsville, son of the late Cecil Martin Malone and Violet Preston Malone. He was also preceded in death by daughter, Kelli Pitman and sister, Jean Evelyn Grisham. He was a 1954 graduate of Gordonsville High School. After high school, Emmett served in the U.S. Marines for four years. Mr. Malone worked for Bonnell Aluminum for over 30 years. He also enjoyed farming and was a hard worker. He will be remembered as a great father.

Memorial services for Mr. Malone are scheduled to be conducted from the Gordonsville Chapel of Bass Funeral Homes on Saturday, August 8, 2020 at 5PM.

Visitation with the family will be at the Gordonsville Chapel of Bass Funeral Homes on Saturday from 3PM until 5PM.

The family requests memorials be made to the Gordonsville High School Sports Complex.