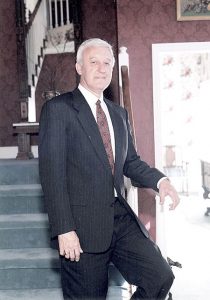 Phillip Wayne Anderson was born on April 20, 1940, in the Anderson Hollow in the Defeated Creek community, the only child born to the late Willard Ray, better known as “Shay”, Anderson and Louise (Holleman) Anderson. Phillip began his love for cattle and had a large herd of angus cattle while in Defeated. He purchased a Defeated Creek community country store in the mid-60’s from the James carter family, which he later sold to the Fred Brown family of Kempville. At the age of 15, he began helping Mrs. Willie B. Hackett and Clyde Reece in the operation of the Hackett Funeral Home in Kempville, located in Smith County, and there began his love for the funeral industry and serving families in their time of need. Back in those days, he could get out of school to help with funerals. In 1971, the Sanderson Funeral Home purchased the Hackett chapel and Phillip began employment with Sanderson Funeral Home and in 1973, when the State of Tennessee required Emergency Medical Technicians on funeral home ambulances to have training, Phillip attended and graduated the July E.M.T. class at Tennessee Technological University. While working at Sanderson in Carthage he simultaneously drove a bus for the Smith County School System running a Defeated Creek route.

He started his own funeral business in 1977 on Hwy. 52 By-Pass in Lafayette as Anderson & son funeral home and Memorial Park. There were eight people buried in the cemetery when he purchased it. In 1986, he purchased from the Paul Alexander family the Alexander Funeral Home in Red Boiling Springs and changed the name to reflect the same as the Lafayette facility’s name. The rest is history. Phillip would go on to be a part of several funeral homes over the years. He and Shirley in 2013 established the Anderson Funeral Home on East Main Street in Gallatin, which is still in operation, with Damon Hobbs as Manager, and completely renovated the facility into a beautiful place. They developed several rental properties on the same city block. Before he knew he had pancreatic cancer, on July 19, 2019 when he and Shirley, in conjunction with Kentucky Licensed Funeral Director and Embalmer Chris Bartley, purchased the Strode Funeral Homes in Tompkinsville and Gamaliel Chapel, in Kentucky and renamed the firms Anderson-Bartley Funeral Home and the Gamaliel Chapel. Phillip kept the funeral homes and the Memorial Park in immaculate condition. You could see his love of antiques in all the funeral homes. Phillip treated everyone the same, it did not matter if they were rich or poor. He never traveled, never went on a vacation, never saw the ocean or never had flown on an airplane. His life was centered around the funeral business’s and cows grazing in a fescue pasture on a picturesque farm and he was good with that and had no regrets. He felt like where he lived and did business and the surrounding counties was as pretty as it gets.

He, so, enjoyed traveling the countryside where he grew up and reminiscing about the olden times, who used to live where, and what kind of vehicle they drove and laugh and tell stories about the pipeline explosion in defeated creek in the late 1940’s and how the residents thought the world was coming to an end and how the old farmers would tell tales about how they had to put stove pipes on their mules legs when they walked through the creeks because of the hot water from the explosion.

Phillip had an unmistakable laugh when he would spin these yarns and loved living in the past about Defeated creek which he referred to as “down home” after moving to Macon county.

In the early 80’s Phillip purchased the Witcher farm on Carthage Road near Red Boiling Springs, where he would spend his remaining days. He valiantly fought the pancreatic cancer disease, never conceding that he could not overcome this aggressive disease that he was diagnosed with in July of 2019.

He is survived by his wife of 23 years and the love of his life, Shirley Overstreet Lowery Anderson, whom he married at the Anderson farm home on December 13, 1997. She had retired from the Department of Health and upon marrying Phillip, joined him in the funeral business, becoming a licensed Funeral Director and Licensed Pre-need Counselor in Tennessee and Kentucky. Also, surviving is son, Wayne Anderson and wife Lee Ann Sewell Anderson, who are both Licensed Funeral Directors and Embalmers in Tennessee and Kentucky. He has three surviving grandchildren, Landon Anderson, Logan and wife, Cristina Anderson, Leah Beth Anderson, all of Red Boiling Springs, great-grandson due in November, yokely Wayne Anderson, two step-children, Gina and husband, Mark Dillon of the Tanglewood community in Smith County and Bob Lowery and wife, Lauren Lowery of Hartsville. Five step-grandchildren, Madison (Sam) Dillon, Mason Dillon, and Mallory Dillon, Mattie and Brett Lowery and special caregiver, Amber Jackson.