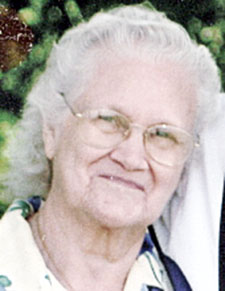 Mrs. Elizabeth Brown, a homemaker of the Tanglewood Community, died surrounded by her loving and caring family at 1:17 a.m. Sunday morning October 4, 2020 at her Dixon Springs Highway home. She was pronounced deceased at 2:39 a.m. by HighPoint Hospice who had been lovingly assisting her family with her care. Mrs. Brown was 89.

Wednesday afternoon October 7th funeral services were conducted by Bro. David Thaxton at 1 p.m. from the Carthage Chapel of Sanderson Funeral Home. Burial followed by her husband of 64 years in the Garden of the Cross at the Smith County Memorial Gardens.

At the former Western Auto Store on the square in Carthage, she was united in marriage by then Justice of the Peace H.H. White to Hilham Community native John Robert Brown. The ceremony was performed on July 16, 1949.

Mrs. Brown was a member of the Full Gospel Tabernacle in Jesus Name in Lebanon.